Moving Minifig Machine (MMM) consists of figures moving around on modules. MMM is a community-based evolving standard and this page contains its documentation.

The goal of MMM is to make it easy for LEGO builders to collaborate on highly-motorised and interactive displays (or "layouts") which combine the enchanting nature of LEGO GBC with the aesthetics of Minifig-scale displays. 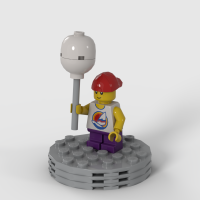 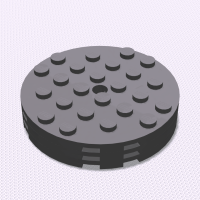 LEGO Minifigs stand on three 6x6 round plates. This constructions is called a "figure" in MMM. The plates are made this way in order to reduce the risk of tipping over, while also allowing a fixed base for mechanisms to grab onto.

A figure typically contains a minifig, but anything may be placed on the plates, as long as it does not extend out over the edge of the round 6x6 plates. The total height of a figure may not exceed 7 bricks. 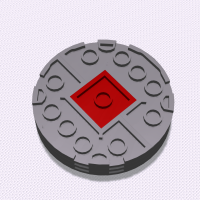 When attending events, it is recommended to replace the lower plate with a pair of round half plates with cutouts, so that a 2x2 plate can be used as marker. 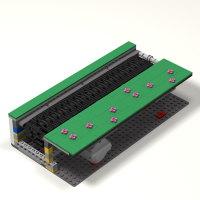 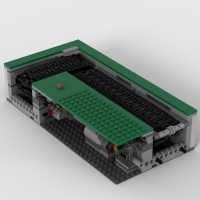 An MMM module is "valid" whenever it can connect to a standard MMM module and figures can pass through the connected modules. In other words: You can ignore the rest of this section if your module can interact with the standard modules.

The standard MMM modules are 16x32 studs and move figures either straight across, or at a corner. They use standard base plates, and a layer of gray or dark gray plates right above the base plate. There is a "front" consisting of white bricks stacked 5 tall. This can be used as a canvas for stickers with information about the modules, or simply left blank. Above that is yet another layer of gray or dark gray plates before a final layer of green tiles and plates acting as grass.

1x10 Technic bricks and technic pins with friction are used to connect modules together similarly to how modular buildings connect. A single pin will typically suffice when connecting two modules.

A Wheel 11mm D. x 8mm is placed between pairs of tracks. This is to prevent figures from tipping over when traveling between them. These wheels can be held by the liftarms mentioned above, as seen on the standard modules.

The figures will be moving counter-clockwise around a layout. 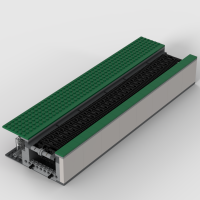 If all modules have their length and width some multiple of 16 (such as 16, 32, 48, and 64) then they will be easy to fit into an MMM layout. So please consider using this size when creating new modules. There are building instructions for a standard straight 16x48 module, which can be used to make up for modules which are not multiples of 32 studs wide. 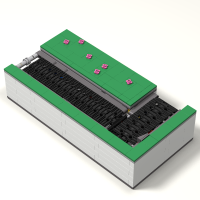 A motor is not required in all modules. Technic cross axles in these idler modules connect to the axles of the motors on the standard modules in order to run on the same motor. The cross axles are mounted on Technic bricks at a height of 4 plates above the base plate, and with 3.5 studs to the back edge.

Modules that can Divert Traffic 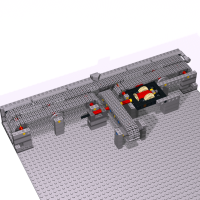 When building fun fair attractions, such as Plane Flyer and Bouncy Castle, multiple tracks work together in order to be able to divert figures off of the main track. The building instructions here show how to create such a base. The technic mechanisms ensure that only a single motor is required, and the direction of the motor decided the chosen path.

Modules that are Activated by Figures 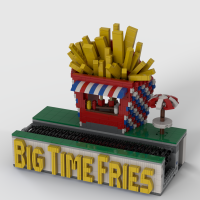 For simple interactions with figures, pressure-activated mechanisms can easily be created. See the building instructions of this "Big Time Fries" module for how to activate a function in the module only when a figure passes by. 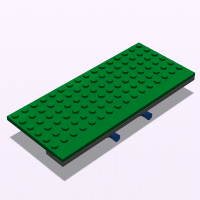 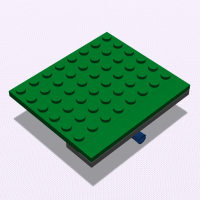 Many modules, including all the standard modules, have so called "gadget slots". These allows "MMM Gadgets" of size 7x8 and 7x16 to be replaced. Gadgets can be decorated and shuffled around at a layout in order to balance the amount of content seen around a layout. Gadgets can be replaced while modules are running, and are much easier to exchange than modules... especially when the modules are running. 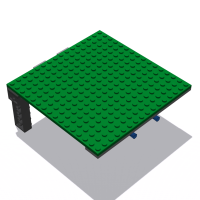 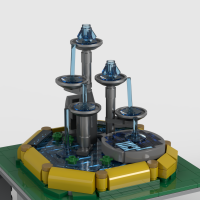 Gadgets of size 16x16 can be used to extend standard modules. They should allow for 7x16 gadgets to be mounted on the back side, and have legs to prevent drooping.

Gadgets can even be motorised, such as the fountain, where the water jets move up and down.

If you have any questions or suggestions, please e-mail Lasse Deleuran at lassedeleuran@gmail.com.